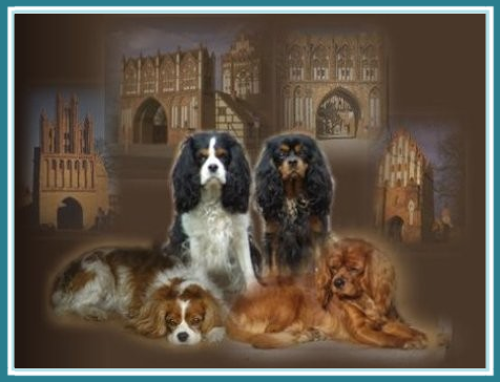 The History of Cavaliers

Small spaniels have been popular companion dogs for hundreds of years. They were found in royal courts and noble homes in Spain (where the spaniel gets his name), France, England and Scotland and were often prominently featured in their owners’ portraits. The Scottish Stuarts were especially fond of the little dogs. Mary, Queen of Scots had a toy spaniel by her side when she was executed, as did her descendant, England’s King Charles I. It was Charles and his son Charles II who lent their name to the dogs that eventually became known as Cavalier King Charles Spaniels.

The toy spaniels’ popularity began to wane after a new king, William, replaced James II (also a Stuart) on England’s throne. William was from Holland, and he favored Pugs. People began crossing the Pugs and spaniels, and eventually their look changed, becoming more flat-faced with a domed head. Dogs like the ones seen in old portraits practically disappeared, except for a few lines here and there, like the ones kept by the Churchill family at Blenheim Palace. The dogs might have faded into the past except for one Roswell Eldridge, a wealthy American who offered a prize to anyone who could produce a dog like the ones he had seen in 17th and 18th century paintings.

British breeders took up the challenge and rebuilt the breed, working with long-nosed English Toy Spaniels (called King Charles Spaniels in England). The first of the “new” spaniels was exhibited in 1928 at Crufts Dog Show. Alas, Eldridge did not live long enough to see him, but his estate paid the prize. Since then, the Cavalier has evolved to what he is today: a sturdy and highly popular companion, combining bird-dog nosiness and Toy-dog affection for people.

The Cavalier ranks 23rd among the breeds registered by the American Kennel Club, up from 54th in 2000. That’s one of the largest leaps in popularity in the past decade. 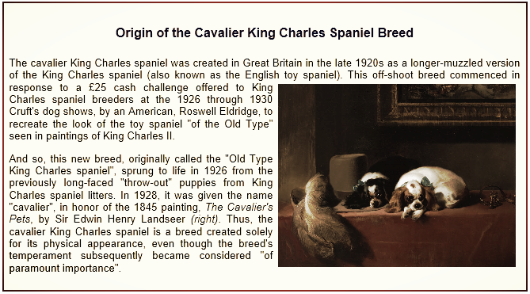 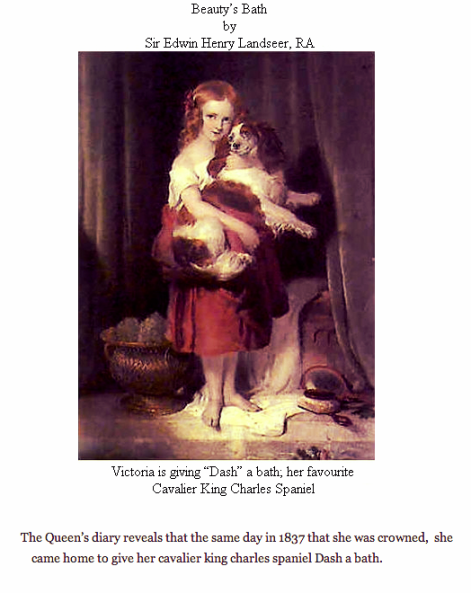 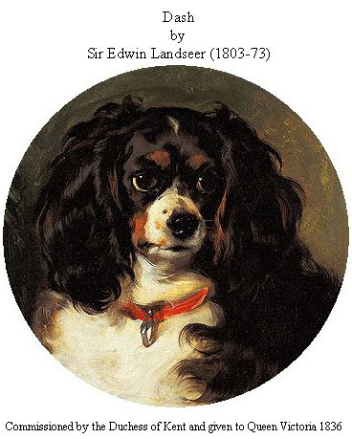 1. They’ve Got A Brand New Claim To Fame Kind of feel like any Cav lover could have told the world this without a research team BUT...A team of scientists recently declared the Cavalier King Charles Spaniel as being the furthest removed physically from the wolf! The breed was also found to be the most removed characteristically from the wolf. Cavs showed only two of the nine aggressive behaviour patterns and none of the six submissive ones that were in the wolf (Huskies showed all 15!).  According to the research, this breed never matures much beyond a wolf puppy of 20 days old for its entire life and stays in what’s called a neotenic state (AKA Peter Pan mode!) for life. So, basically their genetic make-up is that of an actual love sponge that would rather snuggle than argue for pack leader status. I'm cool with that.

Nicknamed “The Comfort Spaniel”, Cavalier King Charles Spaniels were bred keep the laps of the Queens of England toasty warm in drafty castles and on chilly carriage rides. They were with them day in and day out as little buddies while their husbands were at war. While many other breeds no longer perform the tasks they were bred for, cavaliers still take their responsibility pretty fluffin' seriously. In the breed’s early years, Cavs were often brought into beds, which was verrrrry uncommon at the time. They were meant to attract fleas and be bitten instead of their owners, thus saving their humans from the plague or other diseases! Champs.

3. The Ladies Call The Shots

With Cavalier King Charles Spaniels, it is the females that establish dominance hierarchies! The males just go along with the flow and do as they’re told. Pretty magical if you ask me!  Two female Cavaliers in the same household will generally have some issues with dominance, but two males will not. A one male one female pair will not have dominance issues either, as the male will likely not challenge his lady’s authority. #whoruntheworld They go way back. King Charles II, who lived and ruled England in the 17th century, was an extremely devoted fan of the toy spaniels that came to be named after him. The King put forth a law that said no King Charles Spaniel could be barred from any public place, not even the House of Parliament, where animals otherwise were forbidden. Absolutely amazing, and still in place today!

King Charles II was obsessed with Cavs and he became known for allowing the little dogs to follow him everywhere, always accompanied by at least three.  It was documented that the King was so fixated on his dogs that he was accused of ignoring the issues of his kingdom. The struggle was real.

5. There’s A Legend Behind The Blenheim’s Forehead Spot

Legend has it that while the Duke was away fighting the Battle of Blenheim, Sarah, the Duchess of Marlborough, was worried sick that he husband may not return. She sat in the garden with a pregnant Cavalier on her lap and stroked and caressed the mom-to-be, pressing her thumb on top of the spaniel’s head.

When the news arrived that the battle was won and the Duke was safe, the puppies were born!  All of the tiny Cavalier Kings were marked with a chestnut-colored imprint of the Duchess’s thumb in the middle of their forehead. And there ya have it, the origin of the thumbprint found on the head of a perfectly marked Blenheim Cavalier! 6. The Pug Influenced Their Look But People Were Like "Noooooooo!" After King Charles II passed away, the popularity of the breed began to fade and other dogs, like the pug, stepped into the spotlight. The King Charles spaniel was bred with the pug, giving it a shorter snout and domed head. It was actually centuries later that breeders decided they wanted to make the spaniel look the same way that it did when it was in just about all the former reigning monarch’s photos. They weren’t fans of the ‘pug’ in the dog. 7. Queen Victoria Was Just As Obsessed As The Rest Of Us

Queen Victoria had a tricolor Cav named Dash, who she was head over heels for. On the day of her coronation in 1837, she left the momentous event, changed her clothes and gave her little spaniel a bath.

The Queen commissioned dozens of artists and artisans to create images of Dash. Needlework, paintings and porcelain figures galore!  When Dash passed away, Queen Victoria herself wrote his epitaph:      "Here lies Dash, the favorite spaniel of Her Majesty Queen Victoria, by whose command this memorial was erected.  He died on the 20th December 1840 in his ninth year.  His attachment was without selfishness, his playfulness without malice, his fidelity without deceit.  Reader, if you would live beloved and die regretted, profit by the example of Dash."

To make an appointment or to receive more information, please call 239-673-9135 (landline) or send us an email at:

Please note.  Cavaliers by Val reserves the right to cancel or terminate at our sole discretion the adoption of any Cavalier from our kennel.   THIS IS NOT AN ARBITRARY DECISION, BEARING IN MIND THAT THE PUPPY'S FOREVER HOME IS OUR DECISION AND OURS ALONE.  SADLY, WHEN A DECISION IS MADE TO TERMINATE AN ADOPTION, THE FAMILY INVOLVED WILL PROVIDE A 'LESS THAN GLOWING' REVIEW' ON GOOGLE OR OTHER PLACES TO SEEK RETRIBUTION.  WHAT MATTERS MOST IS THE ULTIMATE DESTINATION OF OUR PUPPIES.  REVIEWS ARE SIMPLY AN OPINION, ONE WE CAN'T CHANGE, BUT UNDERSTAND THIS, OUR DECISIONS ARE FOR THE BENEFIT OF THE PUPPY IN QUESTION AND CERTAINLY NOT INTENDED TO ANGER THE FAMILY.

PLEASE BEAR IN MIND, THESE ARE LIVING, BREATHING LITTLE CREATURES WHO NEED TO GO TO THEIR FOREVER HOMES AT 10 WEEKS OF AGE OR SHORTLY THEREAFTER.  A VISIT FOR A PUPPY IN ANY GIVEN LITTER MUST HAVE A DEPOSIT IN PLACE BEFORE WE SCHEDULE AN APPOINTMENT WITH YOU.  WITHOUT A DEPOSIT, A PUPPY CANNOT BE RESERVED UNDER ANY CIRCUMSTANCES.   WE CARE FOR THESE BABIES DEEPLY AND WANT VERY MUCH FOR THESE LITTLE TREASURES TO GO TO THEIR FOREVER HOME, THEY DESERVE GREAT HAPPINESS AND YOU DESERVE THEIR UNQUESTIONING LOVE.  MAKE CERTAIN YOU WANT A PARTICULAR PUPPY BEFORE YOU PLACE A DEPOSIT.  DEPOSITS ARE ALWAYS REFUNDABLE.   ONCE YOU HAVE PLACED A DEPOSITON A PUPPY, THAT PUPPY IS RESERVED FOR YOU AND IS NO LONGER AVAILABLE FOR ANYONE ELSE TO PLACE A DEPOSIT ON. FAMILIES ARE SCHEDULED TO VISIT AND FINALIZE THEIR CHOICE OF PUPPIES AT SIX WEEKS OF AGE  ON A WEDNESDAY,FRIDAY OR SUNDAY AT NOON. VISITS ARE FOR THIRTY MINUTES. A DEPOSIT MUST BE MADE TO SCHEDULE A VISIT. WE SCHEDULE VETERINARIAN AND SPECIALIST APPOINTMENTS THE REST OF THE WEEK.   YOUR VISIT TAKES PLACE IN ORDER OF DEPOSITS SUBMITTED AND  RESERVES THAT PUPPY FOR YOU AND ONLY YOU.  PLEASE BE CERTAIN OF THE COLOR AND GENDER YOU DESIRE, DO NOT 'SETTLE', THAT IS IMPORTANT.  DON'T REGRET YOUR DECISION.   SEE ''ADOPTION FEE'' PAGE FOR MORE INFORMATION

IF A PUPPY IS AVAILABLE  AFTER 10 WEEKS OF AGE A DEPOSIT MAY BE PLACED AND IS REFUNDABLE UNTIL YOU'RE ABLE TO VISIT IN PERSON, SHOULD YOU DECIDE NOT TO ADOPT THE PUPPY THEN YOUR DEPOSIT IS REFUNDABLE.

CERTAIN CIRCUMSTANCES ARE NOT ABLE TO BE COVERED UNDER THESE GUIDELINES, BUT CAN BE WORKED OUT VIA TELEPHONE/EMAIL AS AN AGREEMENT BETWEEN YOUR FAMILY AND OUR KENNEL.

After you have made a selection of your puppy, comes the inevitable 'we can't wait to get our new puppy home', and for you as the new 'parents', it may seem like forever!!  But still this is a very important time for you and your new family member.  Come and visit them, let your new 'fur baby' get used to your voice, your scent, your touch.  We want to accomodate you as much as possible, but with feeding, bathing, grooming and taking our Cavaliers to the vet, we have to ask that you try if at all possible to schedule your visit on WEDNESDAY, FRIDAY or SUNDAY a one hour visit, allowing you time to start to develop a bond with your new little one.  If that is not a possibility due to work/life schedules, we will attempt to accomodate a different day, these bonding visits are very important to the puppy's comfort level with you, making their transition to you and your family so much easier.  We'll have an area set up in our living room with more than ample room to let them wander around and stretch their little legs and for you to play with and handle your new family member.